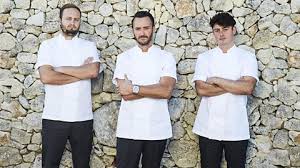 Currently airing on BBC 2 TV is a series called “The Chefs’ Brigade”. It is fronted by Michelin starred chef Jason Atherton and is fascinating to watch the mechanics behind building a successful kitchen team.

Having started off in Italy he is travelling around Europe with a carefully selected group of chefs who each week are given a crash course on the local cuisine and food ethos and then pitted against the local chosen restaurant.

Chefs are naturally very competitive and have a strong desire to win and what I find enthralling is the teams ability to gel (I know it is cleverly edited) and basically show a team spirit that becomes infectious.

Jason has in the past not been keen on doing too much TV but this is a winner for him as he shows what can be achieved by sound people management and support. When you consider his background was working with Gordon Ramsey with a totally different management style it is not surprising he has developed a very different approach of achieving the same end goal.

With Brexit fast looming the opportunity these chefs have been given in such a short space of time will benefit their careers for many years to come as such exposure is life forming and vital in their personal development.

I await the next episode with great anticipation and congratulate the makers on producing a positive message in what often is so negative about an industry I truly love and admire.

Do watch it live or on catch up if not already doing so,,, Tuesdays BBC 2 9pm

I welcome your thoughts as well…